The Ocean Doctor – JEAN-MICHEL COUSTEAU ON THE GULF, HIS FATHER, AND OUR OCEANS’ FUTURE 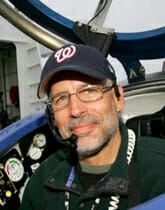 Our special guest this week is Jean-Michel Cousteau, who leads Ocean Futures Society, a nonprofit marine conservation organization which he founded in 1999 to honor his father’s legacy to carry on his pioneering work in exploring, filming and protecting the oceans. Jean-Michel has produced over 80 films, received the Emmy and the Peabody Award among others. He was honored with the Environmental Hero Award by the White House. In February 2002, he became the first person to represent the Environment in the Opening Ceremony of the Olympic Games in Salt Lake City. Jean-Michel led the effort to return Keiko, the captive killer whale of “Free Willy” film fame, to the wild. With his team, Jean-Michel has been working for months to document the impact of the BP Deepwater Horizon oil spill disaster. Also: Our in-depth coverage of the National Commission on the BP Deepwater Horizon Oil Spill continues.