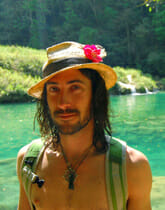 Justin Jones traveled to The Copan Ruinas in Honduras for the celebration of the solstice, the end of the 13th Bak’tun on the Mayan long count calendar, and one hell of a festival. Hear what it was like to experience the end of an era (that some believed would be the end of the world), at the ancient Mayan ruin site. The festival included the Honduran Philharmonic orchestra, a psytrance rave, fire-spinning hippies, and sneaking into the ruins after midnight to drink beers in the rain with the spirit of the Maya, atop an ancient pyramid! Learn about Mayan culture from Isaias Gonzalez, a Spanish teacher and Mayan cultural expert, from Guatemala.